Newcastle Councils, Better Health at Work Awards 2019 at The Crowne Plaza in Newcastle

On 8thMarch 2019 Groove Allstars, Newcastle’s finest function and event band were delighted to be invited back for the 2ndyear in a row to perform at The Better Health At Work Awards, at stunning The Crowne Plaza in Newcastle. It was another amazing event with good times had by all and a packed dance floor from start to finish.

This band is far too good not to dance too!!

The Crowne Plaza is an amazing venue with a fantastic function suite – The Ballroom. The Ballroom has a stage in it for bands and DJs to use and the acoustics of the room are nice and soft and allow for a crisp and bright sound.

We had performed at the venue many times in the past so knew the logistical aspects and what was need in terms of sound and lighting equipment. The PA system installed was an EV 6K front of house sound system which was the perfect set up for the size of the room. The client asked if they could use our radio microphones and sound system for awards and announcements so we made sure that our engineer had one on hand as and when needed.

The band was asked to play a shorter set of around 30 minutes to start before the winners were announced and then a longer set of around 75 minutes towards the end of evening. We also made sure that party music was played through the sounds system earlier in the evening, in any transitional periods over the night and at the end once the band had finished its final set. 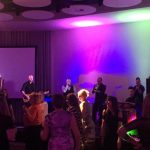 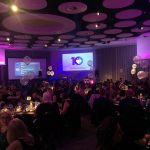 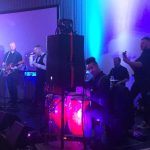 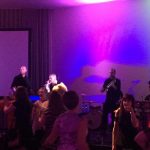 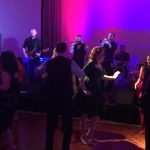